Posted on March 10, 2014 by Omahkohkiaaiipooyii 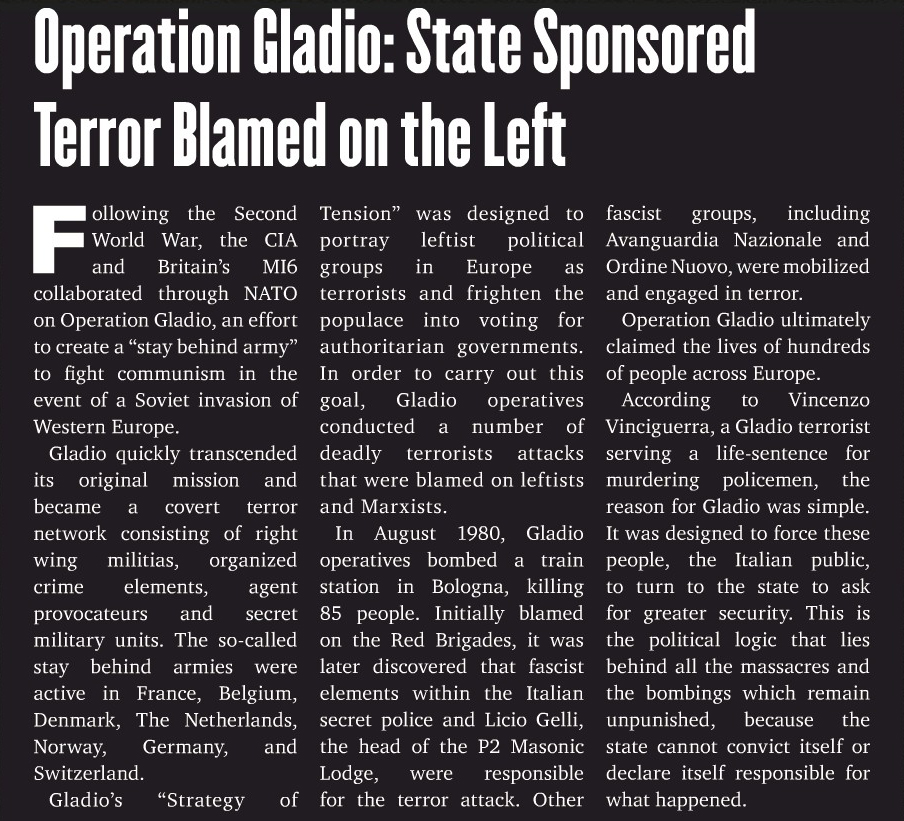 1940 In England Prime Minister Winston Churchill creates the secret stay-behind army Special Operations Executive (SOE) to set Europe ablaze by assisting resistance movements and carrying out subversive operations in enemy held territory. After the end of World War Two the stay-behind armies are created on the experiences and strategies of SOE with the involvement of former SOE officers.

1944 London and Washington agree on the importance of keeping Western Europe free from Communism. In Greece a large Communist demonstration taking place in Athens against British interference in the post war government is dissolved by gunfire of secret soldiers leaving 25 protesters dead and 148 wounded.

1945 In Finland Communist Interior Minister Leino exposes a secret stay-behind which is being closed down.

1947 In the United States President Harry Truman creates the National Security Council (NSC) and the Central Intelligence Agency (CIA). The covert action branch of the CIA, the Office of Policy Coordination (OPC) under Frank Wisner sets up stay-behind armies in Western Europe.

1947 In Austria a secret stay-behind is exposed which had been set up by right-wing extremists Soucek and Rössner. Chancellor Körner pardons the accused under mysterious circumstances.

1948 In France the “Western Union Clandestine Committee” (WUCC) is being created to coordinate secret unorthodox warfare. After the creation of NATO a year later the WUCC is being integrated into the military alliance under the name “Clandestine Planning Committee” (CPC).

1949 The North Atlantic Treaty Organisation (NATO) is founded and the European headquarters is established in France.

1951 In Sweden CIA agent William Colby based at the CIA station in Stockholm supports the training of stay-behind armies in neutral Sweden and Finland and in the NATO members Norway and Denmark.

1952 In Germany former SS officer Hans Otto reveals to the criminal police in the city of Frankfurt in Hessen the existence of the fascist German stay-behind army BDJ-TD. The arrested righ-wing extremist are found non guilty under mysterious circumstances.

1953 In Sweden the police arrests right winger Otto Hallberg and discovers the Swedish stay-behind army. Hallberg is set free and charges against him are mysteriously dropped.

1957 In Norway the director of the secret service NIS, Vilhelm Evang, protests strongly against the domestic subversion of his country through the United States and NATO and temporarily withdraws the Norwegian stay-behind army from the CPC meetings.

1958 In France NATO founds the Allied Clandestine Committee (ACC) to coordinate secret warfare and the stay-behind armies. When NATO establishes new European headquarters in Brussels the ACC under the code name SDRA 11 is hidden within the Belgian military secret service SGR who has its headquarters next to NATO.

1961 In Algeria members of the French stay-behind and officers from the French War in Vietnam found the illegal Organisation Armee Secrete (OAS) and with CIA support stage a coup in Algiers against the French government of de Gaulle which fails.

1964 In Italy the secret stay-behind army Gladio is involved in a silent coup d’état when General Giovanni de Lorenzo in Operation Solo forces the Italian Socialist Ministers to leave the government.

1965 In Austria police forces discover a stay-behind arms cache in an old mine close to Windisch-Bleiberg and force the British authorities to hand over a list with the location of 33 other MI6 arms caches in Austria.

1966 In Portugal the CIA sets up Aginter Press which under the direction of Captain Yves Guerin Serac runs a secret stay-behind army and trains its members in covert action techniques including hands on bomb terrorism, silent assassination, subversion techniques, clandestine communication and infiltration and colonial warfare.

1966 In France President Charles de Gaulle denounces the secret warfare of the Pentagon and expells the European headquarters of NATO. As the military alliance moves to Brussels secret NATO protocols are revealed that allegedly protect right-wingers in anti-communist stay-behind armies.

1968 In Sweden a British MI6 agent closely involved with the stay-behind army betrays the secret network to the Soviet secret service KGB.

1969 In Italy the Piazza Fontana massacre in Milano kills sixteen and injures and maimes 80 and is blame on the left. Thirty years later during a trial of right-wing extremists General Giandelio Maletti, former head of Italian counter-intelligence, claims that the massacre had been carried out by the Italian stay-behind army and right wing terrorists on the orders of the US secret service Central Intelligence Agency (CIA) in order to discredit the Italian Communists.

1970 In Spain right wing terrorists including Stefano delle Chiaie of the Gladio stay-behind army are hired by Franco’s secret police. They had fled Italy following an aborted coup during which right-wing extremist Valerio Borghese had ordered the secret army to occupy the Interior Ministry in Rome.

1971 In Turkey the military stages a coup d’état and takes over power. The stay-behind army Counter-Guerrilla engages in domestic terror and kills hundreds.

1972 In Italy a bomb explodes in a car near the village Peteano killing three Carabinieri. The terror, first blamed on the left, is later traced back to right-wing terrorist Vincenzo Vinciguerra and the Italian stay-behind code named Gladio.

1974 In Denmark the secret stay-behind army Absalon tries in vain to prevent a group of leftist academics from becoming members of the directing body of the Danish Odense University whereupon the secret army is exposed.

1974 In Italy General Vito Miceli, chief of the military secret service, is arrested on charges of subversive conspiracy against the state and reveals the NATO stay-behind secret army during trial.

1976 In Germany in the secret service BND secretary Heidrun Hofer is arrested after having revealed the secrets of the German stay-behind army to her husband who was a spy of the Soviet secret service KGB.

1977 In Turkey the stay-behind army Counter-Guerrilla attacks a demonstration of 500’000 in Istambul by opening fire at the speaker’s platform leaving thirty-eight killed and hundreds injured.

1977 In Spain the secret stay-behind army with support of Italian right-wing terrorists carries out the Atocha massacre in Madrid and in an attack on a lawyer’s office closely linked to the Spanish Communist party kill five people.

1978 In Norway the police discovers a stay-behind arms ache and arrests Hans Otto Meyer who reveals the Norwegian secret army.

1978 In Italy former Prime Minister and leader of the Christian Democratic Party, Aldo Moro, is taken hostage in Rome by an armed secret unit and killed 55 days later because he wanted to include the Italian Communists in the government.

1980 In Italy a bomb explodes in the waiting room of the second class at the Bologna railway station, killing 85 and seriously injuring and maiming a further 200. Investigators trace the crime back to right-wing terrorists.
1980 In Turkey the commander of the stay-behind army Counter-Guerrilla, General Kenan Evren, stages a military coup and seizes power.

1981 In Germany a large stay-behind arsenal is being discovered near the German village of Uelzen in the Lüneburger Heide. Right wing extremists are alleged to have used the arsenal in the previous year to carry out a massacre during the Munich October bear festival killing 13 and wounding 213

1983 In the Netherlands strollers in the forest discover a large arms cache near the Dutch village Velp and force the government to confrim that the arms were related to NATO planning for unorthodox warfare.

1984 In Turkey the stay-behind army Counter-Guerrilla fights against the Curds and kills and tortures thousands in the following years.

1984 In Italy right-wing terrorist Vincenzo Vinciguerra in court reveals Operation Gladio and the involvement of NATO’s stay-behind army in acts of terrorism in Italy designed to discredit the communists. He is sentenced to life and imprisoned.

1985 In Belgium a secret army attacks and shoots shoppers in supermarkets randomly in the Brabant county killing twenty-eight and leaving many wounded. Investigations link the terror to a conspiracy among the Belgian stay-behind SDRA8, the Belgian Gendarmerie SDRA6, the Belgian right-wing group Westland New Post, and the Pentagon secret service Defense Intelligence Agency (DIA).

1990 In Italy judge Felice Casson discovers documents on Operation Gladio in the archives of the Italian military secret service in Rome and forces Prime Minister Giulio Andreotti to confirm the existence of a secret army within the state to parliament. As Andreotti insists that Italy had not been the only country involved in the conspiracy the secret anti-communist stay-behind armies are discovered across Western Europe.

1990 In Switzerland Colonel Herbert Alboth, a former commander of the Swiss secret stay-behind army P26, in a confidential letter to the Defence Departement declares that he is willing to reveal „the whole truth“. Thereafter he is found in his house stabbed with his own military bayonet. The detailed parliamentary report on the Swiss secret army is being presented to the public on November 17.

1990 In Belgium on November 5 NATO categorically denies the allegations of Prime Minister Andreotti concerning NATO’s involvement in Operation Gladio and secret unorthdox warfare in Western Europe. The next day NATO explains that the denial of the previous day had been false while refusing to answer any further questions.

1990 In Belgium the parliament of the European Union (EU) sharply condemns NATO and the United States in a resolution for having manipulated European politics with the stay-behind armies.

1991 In Sweden the media reveals that a secret stay-behind army existed in neutral Finland with an exile base in Stockholm. Finnish Defence Minister Elisabeth Rehn calls the revelations “a fairy tale”, adding cautiously “or at least an incredible story, of which I know nothing.”

1991 In the United States the National Security Archive at the George Washington University in Washington files a Freedom of Information (FOIA) request concerning the secret stay-behind armies with the CIA in the interest of public information and scientific research. The CIA rejects the request with the standart reply: “The CIA can neither confirm nor deny the existence or non-existence of records responsive to your request.”

1995 In England the London based Imperial War Museum in the permanent exhibition “Secret Wars” reveals next to a big box full of explosives that the MI6 and SAS had set up stay-behind armies across Western Europe.

1995 In Italy the Senate commission headed by Senator Giovanni Pellegrino researching Operation Gladio and the assassination of former Prime Minister Aldo Moro files a FOIA request with the CIA. The CIA rejects the request and replies: “The CIA can neither confirm nor deny the existence or non-existence of records responsive to your request.”

1996 In Austria stay-behind arms caches set up by the CIA are discovered. For the Austrian government Oliver Rathkolb of Vienna University files a FOIA request concerning the secret stay-behind armies with the CIA. The CIA rejects the request and replies: “The CIA can neither confirm nor deny the existence or non-existence of records responsive to your request.”