Posted on April 6, 2014 by Omahkohkiaaiipooyii

Post Categories: Asia
Peter Symonds / The 4th Media News | Sunday, February 9, 2014, 19:02 Beijing
STTPML Comment: Whatever accusations made against the Japanese militarists and historical revisionists apply also to the U.S., British, German, Italian and other forces of cover-up and historical revisionism who were also participants in and/or accomplices after the fact in the atrocities of each other’s nations.
https://sttpml.org/parts-i-and-ii-combined-breathtaking-hubris-and-hypocrisy-the-real-nature-and-foundations-of-anglo-american-imperiums/
https://sttpml.org/documents-detail-how-japanese-imperial-military-forced-dutch-females-to-be-comfort-women-and-allied-complicity-in-cover-up-hiding-wanted-war-criminals-and-use-of-research-on-live-human-subje/
https://sttpml.org/americas-chemical-weapons-hypocrisy-conspiracy-and-a-forgotten-history/
https://sttpml.org/the-cia-and-wanted-nazi-war-criminals/ 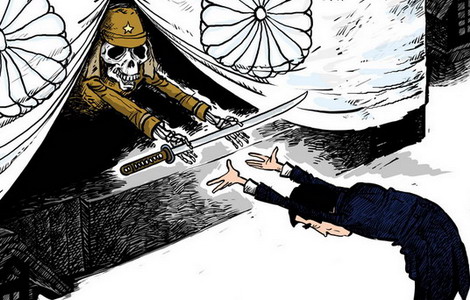 Nearly seven decades after the end of World II, the right-wing government of Prime Minister Shinzo Abe is rapidly remilitarising Japan, freeing its armed forces from any legal or constitutional constraints and revising history to whitewash the past crimes and atrocities of Japanese imperialism.

Abe has been engaged in an ideological offensive that was marked by his visit December 26 to the notorious Yasukuni Shrine to Japan’s war dead, including 14 convicted class A war criminals. The same month, he appointed four right-wing figures to the board of governors of Japan’s public broadcaster NHK in order to shift its political orientation.

The purpose of the appointments has quickly become apparent. In late January, the new NHK chairman, Katsuto Momii, triggered a public furore by justifying the systematic abuse of hundreds of thousands of women as sex slaves by the Imperial Army in the 1930s and 1940s.

Momii apologised for expressing his private view in his role as chairman, but did not retract the remarks.

This week, another Abe appointee, Naoki Hyakuta, declared that the Rape of Nanking, one of the worst atrocities of the twentieth century, “never happened.”

Yet Hyakuta claimed that the Nanking massacre was fabricated in order to cover up the crimes of the US in dropping atomic bombs on Hiroshima and Nagasaki.

It is an argument that until now has been confined to extreme right-wing fringe groups. They justify the horrific crimes of Japanese imperialism in the 1930s and 1940s by pointing to those of US imperialism during World War II.

The denial of crimes on the scale of the Rape of Nanking has only one meaning—it is the ideological preparation for new wars and new atrocities.

The Japanese government is not alone. Five years after the eruption of the 2008 global financialcrisis, capitalism is mired in economic slump and financial turmoil, fuelling inter-imperialist rivalries, neo-colonial interventions and diplomatic intrigues in every corner of the world.

It is no accident that as Abe is refurbishing Japanese militarism, the new grand coalition government in Germany is repudiating its previous policy of military restraint. Nor is the Japanese government the only one rewriting history. The British and Australian governments, among others, are seizing on the anniversary of World War I to glorify the bloodbath that claimed the lives of millions in the inter-imperialist struggle for colonies, markets and strategic dominance.

The chief destabilising factor in world politics is the eruption of US militarism. US-led neo-colonial interventions have devastated Afghanistan, Iraq, Libya and Syria. Now, in the name of Obama’s “pivot to Asia”, the US is engaged in an all-out diplomatic offensive to undermine China and encircle it militarily.

The Obama administration is responsible for encouraging Japan to take a more aggressive stand against China, creating a dangerous new flashpoint in the East China Sea—the disputed Senkaku/Diaoyu islands.

Yesterday, US Secretary of State John Kerry met with his Japanese counterpart and affirmed again that Washington would back Tokyo in a war with Beijing over the rocky, uninhabited outcrops.

Having pressed Japan to remilitarise, the US has set political forces in motion that it does not control. The Abe government, while affirming the US-Japan alliance, is determined to defend the interests of Japanese imperialism.

Since coming to power in December 2012, Abe has boosted the military budget and established a National Security Council to concentrate foreign and defence policy in his hands. He is pushing to end constitutional restraints on the involvement of the armed forces in aggressive wars.

This revival of militarism is both to prosecute the interests of Japanese imperialism abroad and project outwards, against a foreign “enemy”, the tensions produced by the growing social crisis at home. Abe came to power promising to end two decades of deflation and economic stagnation. However, his “Abenomics” has proven to be a chimera, boosting share markets but failing to produce sustained growth.

Abe set out his agenda very clearly at the World Economic Forum at Davos last month. He made clear that Japanese imperialism was not about to relinquish its position as a leading power in Asia.

Dismissing those who described Japan as the “land of the setting sun”, Abe insisted that “a new dawn” was breaking. His portrayal of China as an aggressive new power comparable to Germany prior to World War I went hand-in-hand with an outline of pro-market restructuring designed to turn Japan into one of the “most business-friendly places in the world.”

There is no significant opposition in the Japanese political establishment to Abe’s rightward lurch to militarism. While voicing tepid criticisms of the government, the opposition Democratic Party of Japan, along with the Japanese Communist Party, fully backs Japan’s claims to the disputed islands in the East China Sea—the central issue in mounting tensions with China.

The working class, however, has a long history of opposition to Japanese militarism. The crimes of the wartime regime in the 1930s and 1940s were not confined to atrocities abroad such as the Nanking massacre.

The Tokkō, or “thought police”, were as ruthless as the Nazi Gestapo in Germany in eliminating all forms of criticism or opposition, especially among workers.

Abe’s recently enacted secrecy law provoked widespread opposition in Japan precisely because it recalled the 1925 Peace Preservation Law that greatly expanded the role of the Tokkō.

Abe’s provocative attacks on China, the comments by his NHK appointee denying the Rape of Nanking, and related developments constitute a sharp warning to workers and youth in Japan and every other country.

The preparations for war are accompanied by a campaign of lies and jingoism that presages class war against the working class. Workers can halt the drive to war and the assault on their living standards and democratic rights only by unifying their struggles internationally on the basis of a socialist program to put an end to the bankrupt profit system.