Global Debt: The Tip and the Bulk of the Iceberg

Posted on March 6, 2015 by Omahkohkiaaiipooyii

Global Debt: The Tip and the Bulk of the Iceberg 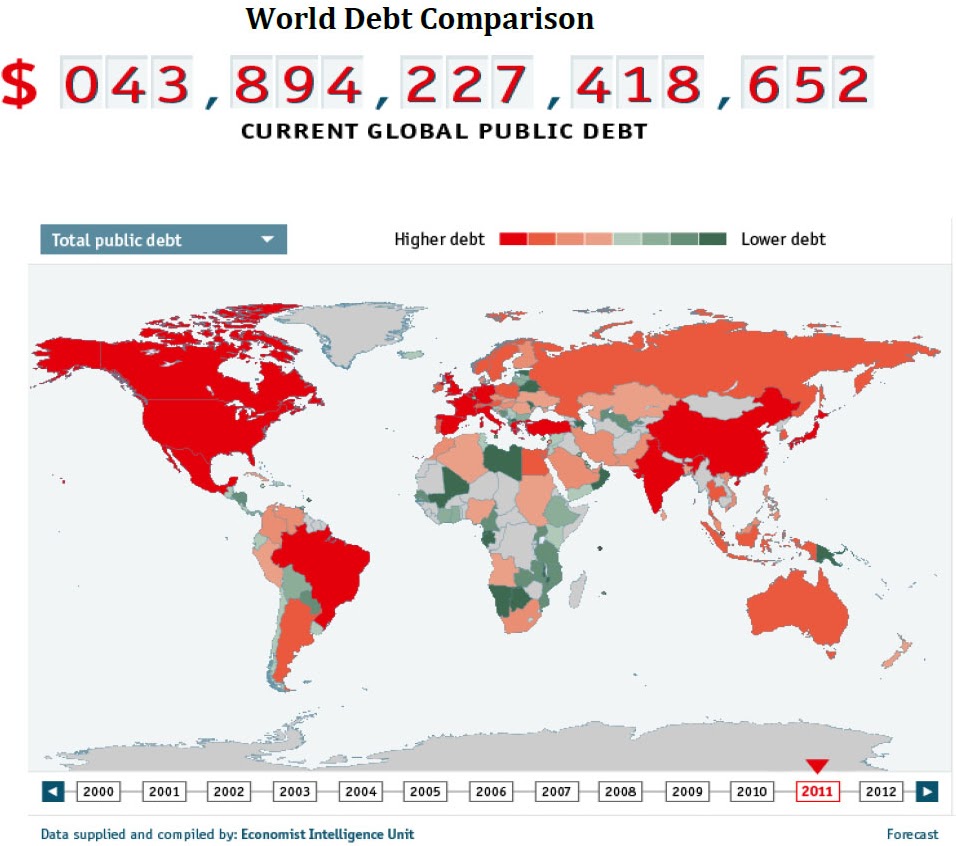 Despite the chilling nature of the global debt and individual country debt figures cited in the report published by the well-known consulting firm McKinsey in February 2015, for the most part these figures are incomplete and underestimated. The situation is in fact far worse. This is clearly illustrated by the US, whose share of global debt is the largest.

According to preliminary estimates by the US Treasury, in 2014 America’s public debt was close to USD 18 trillion, which is nearly 110 per cent of the country’s GDP. In the McKinsey report, however, the relative level of US debt in the middle of 2014 was estimated to be just 89 per cent of GDP (an underestimation of approximately 20 percentage points).

The fact is that the report’s authors focus their attention on so-called ‘net’ public debt, meaning the debt of a central government that services and repays its debts using funds from the central budget. With respect to the US, it is a federal government that borrows funds through the distribution of US Treasury securities. In the 1990s, up to 15 per cent of all federal budget expenditure was spent on servicing central government debt.

Today, the percentage is considerably lower because interest rates on US Treasury securities have become very low, almost nominal, as a result of the quantitative easing (QE) programme (5-6 per cent of all federal budget expenditure is currently being spent on servicing debt).

And there is one more subtlety: the debt of the central government is divided into so-called public and internal debt. The former refers to market debts associated with Treasury securities, while the latter relates to the shifting of money from one pocket to another by the state.

The McKinsey report contains a number of recommendations for controlling the growth of global debt. One of these is to provide a more complete picture of debt, since current official statistics do not reflect every type of debt.

The report rightly points out that as well as the official government debt (which includes the net debt mentioned above), the government also has other major obligations that could be termed off-balance sheet obligations.

Official government debts are obligations of the government and government organisations arising from credit agreements and the distribution of debt securities. As well as these, however, the government also has other debts that could be referred to as social liabilities.

These refer to a government’s commitments to their own citizens with regard to pension benefits, healthcare, and benefits to various categories of people (the unemployed, the disadvantaged, mothers with large families etc.)

The portion of the social liabilities not repaid in the current financial year is carried over to the next year. Some will simply be eliminated. One could also talk about obligations to future generations.

The fulfilment of these future obligations may involve the creation of special funds (budgetary and extra-budgetary) of a cumulative nature, and delays in the replenishment of these funds will also mean an increase in the obligations (debts) of the government.

Three years ago, a professor at Boston University, Laurence Kotlikoff, attempted to assess the total debt of the United States in view of the government’s social liabilities in future periods. Kotlikoff has developed his own method of economic analysis – a demographic calculation that anticipates the planning of state budgets in light of future time periods and population dynamics. It turned out that the US government’s total debt exceeds USD 220 trillion (as of 2011).

It seems that Professor Kotlikoff estimated the debt taking into account the US health care reforms initiated by President Barack Obama that promise much. As well as social liabilities, Kotlikoff’s estimate also takes account of military obligations and certain other government programmes.

If the American government is responsible to society and wishes to fulfil its financial obligations in the foreseeable future, it needs to adjust its current budget in the strongest way possible. The adjustment should amount to 12 per cent of GDP (around USD 1.8 trillion as of 2011).

This means that the government must either raise taxes or reduce expenditure by this amount. A combination of both is possible, but, according to Professor Kotlikoff, no government is in a position to make such a sharp about-turn in their fiscal policy. Hence his brief verdict: in terms of the state of its budget, the US is completely bankrupt.

Some time ago, a summary of a report by the authoritative Washington-based Cato Institute was published. According to this institute, US government debt in 2014 was not USD 18 trillion, but was in fact USD 91 trillion. The huge difference arises from the fact that official estimates do not include “the unfunded liabilities of programs like Social Security and Medicare.

While those liabilities don’t show up on the country’s official balance sheet, they nonetheless represent legal obligations of the US government. The expected shortfall from these programs brings the true debt to an unfathomable USD 90.6 trillion,” notes the Cato Institute’s brief summary.

The full version of the report including all calculations is expected to appear in March. Unfortunately, the McKinsey report does not contain any figures relating to the off-balance sheet government debt of the US and other countries.

Incidentally, it is not just the government sector that has off-balance sheet debts, but also other sectors of the economy. This refers to various guarantees and sureties issued by banks and other financial companies, and corporations in the non-financial sector of the economy.

Transactions in various financial derivative instruments (derivatives) are also not reflected, or are poorly reflected, in balance sheets. The large amount of off-balance sheet debts that were out of sight of financial regulators is one of the reasons for the financial crisis that began in the US in 2007-2008.

According to the authors of the Cato Institute report, shadow banking is an extremely acute problem in the global economy and international finance. This includes the activities of various organisations that do not fall under the category of banks (traditional lending and borrowing organisations) and slip out of sight of banking supervisory authorities.

Experts believe that in many countries today, the majority of loans and credits are no longer issued by traditional banks, but by shadow organisations. The claims and liabilities that arise from the transactions of these unofficial banks are not fully taken into account by economic entities or financial supervisory authorities.

According to the report’s authors, shadow banking has reached particularly high levels in China. This is creating the threat of a possible financial crisis there which could, in turn, provoke a global financial crisis.

The authors of the McKinsey report focus on the risks of a second wave of the crisis. Meanwhile, a catastrophic crisis is looming in the more distant future related to the inability of governments to fulfil their social obligations.

The recommendations put together by the authors of the McKinsey report to prevent the further growth of debt contain nothing new when compared with what has already been done to overcome the consequences of the first wave of the crisis. The underwater part of the iceberg, the growth of off-balance sheet government and private debt, remained out of sight of the report’s authors.