Posted on January 15, 2015 by Omahkohkiaaiipooyii

Florida’s execrable GOP governor, Rick Scott, has fired the state police commissioner for not helping his re-election campaign in contravention of Florida statutes against involving state agencies in partisan campaigns.

• Scott’s campaign asked Bailey to take part in a June conference call to discuss “the governor’s platform for the next four years.” Bailey considered it wrong for him, as a law enforcement officer, to engage in partisan politics and emails show he refused. On Tuesday, Scott’s chief spokeswoman, Jackie Schutz, said: “Obviously, FDLE did the right thing.”

• Bailey complained to Scott’s chief counsel, Pete Antonacci, that he was receiving solicitations to donate money to Scott’s re-election on his state computer. When he complained to Antonacci, Bailey said he was told, “Just delete it.” It’s illegal in Florida to destroy public records. Scott’s office said no state employees received email solicitations unless they gave an email address to the campaign, which Bailey said he didn’t do.

• In March 2014, the Republican Party, on Scott’s behalf, tried to send the FDLE a check for $90,000 to cover the costs of transporting Scott campaign workers in state vehicles to ensure that no state cars were used for campaign purposes. The FDLE refused the money, saying it had no legal authority to accept it and that it was inappropriate to take money from a political party. The check was dated March 4, 2014, and was voided a week later, the Republican Party’s campaign finance database shows. Scott’s office said a new check for $90,151.50 was written to the state general revenue fund in April. “We properly reimbursed the state,” Schutz said. “Everything was paid for properly.”

• FDLE agents in Southwest Florida rejected requests by Scott’s campaign that they transport Meghan Collins, a campaign staffer assigned to first lady Ann Scott. The agency said it is responsible for transporting the governor and first lady, not campaign workers. Collins, now chief spokeswoman for the Department of Education, did not respond to a request for comment.

On March 19, 1997, investigators from the FBI, the Internal Revenue Service and the Department of Health and Human Services served search warrants at Columbia/HCA facilities in El Paso and on dozens of doctors with suspected ties to the company. Eight days after the initial raid, Scott signed his last SEC report as a hospital executive. Four months later the board of directors pressured Scott to resign as Chairman and CEO. … The directors had been warned … that incentives Columbia/HCA offered doctors could run afoul of a federal antikickback law that seeks to limit conflicts of interest in Medicare and Medicaid. In settlements reached in 2000 and 2002, Columbia/HCA pled guilty to 14 felonies and agreed to a $600+ million fine in the largest fraud settlement in U.S. history. Columbia/HCA admitted systematically overcharging the government by claiming marketing costs as reimbursable, by striking illegal deals with home care agencies, and by filing false data about use of hospital space. They also admitted fraudulently billing Medicare and other health programs by inflating the seriousness of diagnoses and to giving doctors partnerships in company hospitals as a kickback for the doctors referring patients to HCA. They filed false cost reports, fraudulently billing Medicare for home health care workers, and paid kickbacks in the sale of home health agencies and to doctors to refer patients. In addition, they gave doctors “loans” never intending to be repaid, free rent, free office furniture, and free drugs from hospital pharmacies.”

What’s got into America’s cops?

I remember a time when cops didn’t react to college students celebrating a football victory with armored vehicles, riot cops in combat gear, SWAT teams, and indiscriminate pepper-spraying of crowds simply because they’re blocking a street.

Heck, in the 1960s, when I was a student, cops didn’t use this much force even against antiwar protesters. We haven’t seen police violence like this since the civil rights marches in the Deep South.

I can see the logic (even though I don’t agree with it) of racist cops brutalizing citizens for trying to overthrow segregation. But over a football game? Why would cops attack a crowd of Ohio State fans with military-style force?

Have the police lost their marbles? Maybe they had money on Oregon …

Hick towns are everywhere, and every state has some. You have a constitutional right to peacefully assemble to petition the government for redress of grievances in most places, but not in Bloomington, Minnesota, where local authorities sent undercover cops to protesters’ planning meetings in order to identify the ringleaders, then charged them with a laundry list of petty infractions like “aiding and abetting trespassing.” I guess the police there

don’t like protests against police abuse of citizens. So, what the hell, let’s stomp on citizens’ constitutional rights some more.

In Oklahoma, a white guy shooting a black police chief isn’t a crime

“The man who allegedly shot an Oklahoma police chief four times during an attempted arrest likely won’t face criminal charges. … Horton shot Police Chief Louis Ross three times in the chest and once in the arm after the chief and four Washita County sheriff’s deputies raided the Horton home. … Horton claimed he didn’t know it was an officer inside the home. … The police chief is black, and the suspect is white.” (Photos: Chief Louis Ross, Survivalist Dallas Ross) 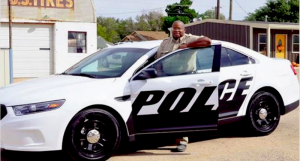 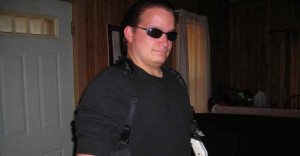 In Pennsylvania, ‘No Trespassing’ means ‘cops may enter’

When I read this story, I couldn’t believe my eyes, and you won’t either.

A guy is at home, typing on his computer, when a state trooper strolls in uninvited. “He began peppering me with questions, asking if I lived there, for example, and for me to identify myself.”

Huh? “I did venture a very polite question, basically, why are you here and why didn’t you knock? The police officer then informed me that he had probable cause to enter my house, because I had posted a No Trespassing sign … in his experience, that usually meant that the house was in bank foreclosure.”

Kinda gives “No Trespassing” a whole new meaning, doesn’t it? Who would imagine that posting a No Trespassing sign constitutes a waiver your constitutional rights?

America’s police are out of control. 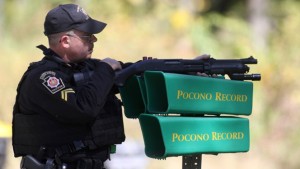 Would you want this Pennsylvania state trooper walking into your bedroom unannounced whenever he pleases?

Miami cops use mugshots of blacks for target practice

“A South Florida family is outraged at North Miami Beach Police after mug shots of African American men were used at a shooting range for police training.”

Because a National Guard member who visited the shooting range for training with her unit found a bullet-riddled picture of her brother tacked to the target board.

Okay, so we’ve had a raft of police shootings of unarmed black men, followed by anti-police demonstrations all over the country, and with public confidence in police on the verge of collapse a podunk police department gets caught doing this … what were they thinking? I say fire the whole damn police department and start over with a new chief and new officers. 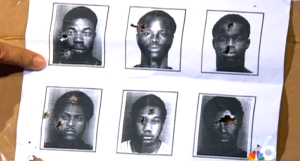