Posted on September 5, 2014 by lookinghawk

Commissioner of Indian Affairs William Atkinson Jones sent this letter to superintendents of all federal reservations and agencies in January 1902. The notorious missive soon became known as the “haircut order.”

Jones observed that many Native Americans continued to wear their hair long, to “paint,” and to participate in tribal dances. The commissioner objected to these traditions on a number of grounds, arguing that dancing and feasting were “simply subterfuges to cover degrading acts and to disguise immoral purposes,” that painting caused people to go blind, and that long hair simply was not “in keeping with the advancement they are making … in civilization.”

Jones suggested that superintendents could induce compliance by holding back rations and required a report on the progress of these efforts by June 30, 1902.

News of the letter and its contents made national news, with many observers outraged at the order. In the Harper’s Weekly’s edition of Feb. 8, 1902, the anonymous editors wrote a paragraph that was supportive of the Native Americans’ practices, if grossly condescending:

The red man has neither newspapers, letters, books, nor games to break the monotony of his life. He loves company. He gets all his news, all his pleasures, in daily contact with his fellows. He has always lived in a village.

Rather than being forced to submit to “government shears,” the editors argued, the young Native American should be “educated along the line of his natural aptitudes, teach him to adapt to new conditions step by step.”

This type of outcry, coupled with even worse publicity after a few supervisors used harsh methods to enforce Jones’ order, caused the Bureau of Indian Affairs to back down. New directives advised agents that they should use persuasion and example, rather than force, to get Native Americans to dress like “citizens.”

The bureau tried for decades to eliminate ceremonial dances. By the 1920s, however, more and more tribes held annual gatherings based on these traditions, which survived despite the BIA’s disapproval.

Letter from William Jones to Superintendent, Round Valley, CA. National Archives, Records of the Bureau of Indian Affairs. 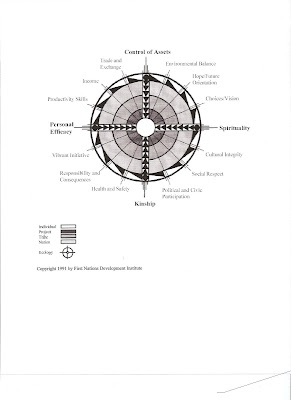 (click on picture to enlarge)
–
Why are these four[19] core values and imperatives considered fundamental to development and sustainability in Indigenous terms? There is an old saying that sums it up: “It is better to know where to go and not know how, than to know how to go and not know where.” Technology, “Capital” even “land” and “Labor”, are part of the how to go and not where to go. Without Sovereignty and Control of Assets and critical resources, without Vision informed by Spirituality[20] , without Kinship and healthy families and Clans and Bands, without Personal Efficacy (health and viability) of individuals, no nation, especially one surrounded by hostile forces that consider its mere existence a “threat” of some sort, will grow, develop or even survive and be sustained.

This is no different for China than it is for any Indigenous society and vice-versa. Since its inception in 1949, the People’s Republic of China, with its own sovereign and socialist institutions and roads to growth, development and sustainability with Chinese characteristics, has been: encircled; threatened with nuclear annihilation; attacked internally by secessionist and separatist forces acting as proxies for foreign powers; hit with repeated embargos and denials of critical technologies and goods and services; slandered, demonized and isolated among the community of nations . [21]

–
Social systems engineering, to which all Indigenous nations, along with socialist nations like China have been subject, involves putting targeted nations under such siege from external and internal pressures that have been manufactured and/or exacerbated, that the targeted nation winds up in a straight jacket, forced to divert precious scarce resources into defense and away from development and sustainability, that the targeted nation appears to “conform”, and thus the “proof” has been engineered, of the caricatures that have been made of that targeted nation: “backward”; “repressive”; “inefficient”; “undemocratic”; “stagnant”[22] etc. But in a fair fight, or peaceful competition between systems, socialism beats capitalism any day, even in terms of capitalism’s own definitions and measurements of “efficiency”, just as traditional Indigenous societies beat modern-day assimilated BIA-DIA controlled and capitalist influenced Indigenous societies, in terms of all the requisite ingredients to development and sustainability shown in the traditional Indigenous model of development and sustainability, any day.

That is why they were put under siege with their core institutions and values slandered, demonized and marginalized historically and in the present: in a fair and peaceful competition between systems, socialism beats capitalism, as Traditional ways are far superior, even in terms of levels of science and technology, than what has become of Indigenous societies in North America and elsewhere under capitalism and “modernity.” [23]