“Freedom of Speech” in Particular For Those Who Openly Intend To Abolish It in General?

Posted on March 25, 2015 by Omahkohkiaaiipooyii

In Defense of Confederate and Nazi License Plates 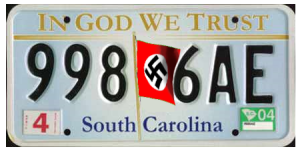 Ilya Shapiro is traditional Jewish liberal lawyer, what I now call a lace curtain liberal yid, who puts his own interests and the law in the way of justice.  These talented individuals remind me of a relative of mine, a corporate attorney, who once explained to me that in her job the truth did not matter.  We were discussing an issue of intellectual property where the right decision probably belonged to her opponent.  My relative. did not care. She explained that she was paid to cause the other side to spend so much money that to was easier to give up.

Mr. Shapiro is cut from this same mold, the mold I call legal thuggery.  He  has become a senior fellow in constitutional studies at the Cato Institute and n that capacity filed a brief on behalf of P.J. O’Rourke, Lenny Bruce’s lawyer, and several other First Amendment defenders in Walker v. Sons of Confederate Veterans

From The Daily Beast: Allowing the Confederate flag on Texas license plates would offend a lot of people, but Texas’s decision to nix the Stars and Bars tramples the First Amendment.

The racist fraternity chant in Oklahoma has unified people of all political stripes around a very American response: condemning the speech while recognizing that it’s protected by the First Amendment. Unlike in most countries, our Constitution prohibits the government—including a state college—from punishing people for the content of their expression.

Coincidentally, on March 23, the Supreme Court will hear a case that raises just this issue. This case, out of neighboring Texas, involves a group whose design for a specialty license plate was denied because it included a Confederate flag.

Although the Lone Star State recognizes April as Confederate History Month and spends January 19 celebrating Confederate Heroes Day, it would spare its citizens in this one context the sight of a flag it otherwise venerates: Texas has empowered its Department of Motor Vehicles to prevent people from being offended.

I wonder how far Mr. Shapiro would go or whether the ever gives a thought t the implicit endorsement is cleint (Cato) is making of racism?  Would this lawyer defend the rights of Nazis to print the swastika on their plates?  How about the KKK?

This entry was posted in TERRORISM, The Ave. Bookmark the permalink.