‘The US government is currently undertaking a massive effort to digitally arm itself for network warfare.’

The National Security Agency intelligence service isn’t just trying to achieve mass surveillance of Internet communication. The digital spies of the Five Eyes alliance want more. Documents from the archive of Edward Snowden indicate they are planning for wars of the future in which the Internet will play a critical role, with the aim of being able to use the net to paralyze computer networks and, by doing so, potentially all the infrastructure they control. This slide is from an NSA presentation on its Quantumtheory program.

New revelations eminating from the documents leaked to journalists by Edward Snowden reveal that the NSA has a far more developed and sinister approach to cyberwarfare than previously known.

“From a military perspective, surveillance of the Internet is merely ‘Phase 0’ in the US digital war strategy.”

Based on new and separate reporting from the New York Times and Germany’s Der Spiegel, the National Security Agency is engaged in what amounts to “guerilla warfare” in which its clandestine hacking operations are designed to be undetectable, untraceable, and therefore, totally unaccountable.

As the team of journalists reporting for Der Spiegel describe it, “the US government is currently undertaking a massive effort to digitally arm itself for network warfare.” And, they report, the NSA—along with its intelligence partners around the world—”have adopted ‘plausible deniability’ as their guiding principle for Internet operations.”

NYT: The Story of North Korea

In North Korea, before there was ‘The Interview’—the recent film that had its destiny changed from a Hollywood flop to an international incident—there was the NSA.

According to new reporting by the New York Times, the incidents surrounding the alleged hacking by the North Korean government on Sony Pictures Entertainment last year must be seen through the context of earlier attempts, dating back to 2010, when the U.S. National Security Agency made complex efforts to digitally-infiltrate North Korea.

Spurred by growing concern about North Korea’s maturing capabilities, the American spy agency drilled into the Chinese networks that connect North Korea to the outside world, picked through connections in Malaysia favored by North Korean hackers and penetrated directly into the North with the help of South Korea and other American allies, according to former United States and foreign officials, computer experts later briefed on the operations and a newly disclosed N.S.A. document.

A classified security agency program expanded into an ambitious effort, officials said, to place malware that could track the internal workings of many of the computers and networks used by the North’s hackers, a force that South Korea’s military recently said numbers roughly 6,000 people. Most are commanded by the country’s main intelligence service, called the Reconnaissance General Bureau, and Bureau 121, its secretive hacking unit, with a large outpost in China.

And as Der Speigel reported on Sunday, the NSA has been building and expanding its offensive cyberwarfare capabilities for years:

According to top secret documents from the archive of NSA whistleblower Edward Snowden seen exclusively by SPIEGEL, they are planning for wars of the future in which the Internet will play a critical role, with the aim of being able to use the net to paralyze computer networks and, by doing so, potentially all the infrastructure they control, including power and water supplies, factories, airports or the flow of money.

During the 20th century, scientists developed so-called ABC weapons — atomic, biological and chemical. It took decades before their deployment could be regulated and, at least partly, outlawed. New digital weapons have now been developed for the war on the Internet. But there are almost no international conventions or supervisory authorities for these D weapons, and the only law that applies is the survival of the fittest.

Canadian media theorist Marshall McLuhan foresaw these developments decades ago. In 1970, he wrote, “World War III is a guerrilla information war with no division between military and civilian participation.” That’s precisely the reality that spies are preparing for today.

The US Army, Navy, Marines and Air Force have already established their own cyber forces, but it is the NSA, also officially a military agency, that is taking the lead.

Later in the report, Der Spiegel describes how a new document from the Snowden archive reveals that NSA operatives saw internet surveillance to be only a first step in their desire to “control it all”—a phrase used to describe near total digital awareness of global communication networks. According to their review of the document:

From a military perspective, surveillance of the Internet is merely “Phase 0” in the US digital war strategy. Internal NSA documents indicate that it is the prerequisite for everything that follows. They show that the aim of the surveillance is to detect vulnerabilities in enemy systems. Once “stealthy implants” have been placed to infiltrate enemy systems, thus allowing “permanent accesses,” then Phase Three has been achieved — a phase headed by the word “dominate” in the documents. This enables them to “control/destroy critical systems & networks at will through pre-positioned accesses (laid in Phase 0).” Critical infrastructure is considered by the agency to be anything that is important in keeping a society running: energy, communications and transportation. The internal documents state that the ultimate goal is “real time controlled escalation”.

One NSA presentation proclaims that “the next major conflict will start in cyberspace.” To that end, the US government is currently undertaking a massive effort to digitally arm itself for network warfare. For the 2013 secret intelligence budget, the NSA projected it would need around $1 billion in order to increase the strength of its computer network attack operations. The budget included an increase of some $32 million for “unconventional solutions” alone.

The Der Spiegel journalists described the NSA’s tactics as a kind of digital “guerilla warfare” in which “little differentiation is made between soldiers and civilians.”

“It’s a stunning approach,” they write, “with which the digital spies deliberately undermine the very foundations of the rule of law around the globe. This approach threatens to transform the Internet into a lawless zone in which superpowers and their secret services operate according to their own whims with very few ways to hold them accountable for their actions.”

This work is licensed under a Creative Commons Attribution-Share Alike 3.0 License
Published on
Monday, January 19, 2015
by
Common Dreams

British intelligence swept up private communications of journalists of some of the largest media outlets in the UK and U.S., a new Guardian analysis of whistleblower Edward Snowden’s NSA files reveals.

Emails exchanged between journalists and editors at the Guardian, the BBC, Reuters, the New York Times, the Washington Post, Le Monde, the Sun, and NBC were harvested, saved, and shared in November 2008 among intelligence agents during a Government Communications Headquarters (GCHQ) test exercise, according to the analysis by Guardian reporter James Ball, published Monday.

The surveillance sweep collected 70,000 emails in less than 10 minutes.

Press releases, story revisions sent between reporters and editors, and other communications were all harvested as part of a test of a GCHQ tool that was developed to “strip irrelevant data out of the agency’s tapping process,” Ball writes. After being retained, the emails were made available on GCHQ’s intranet to cleared personnel.

While there was no evidence to suggest whether those reporters were intentionally targeted, a separate set of UK intelligence documents show that “investigative journalists” were placed on a security threat assessment list alongside terrorists and hackers.

One internal document intended for army intelligence stated that “journalists and reporters representing all types of news media represent a potential threat to security.”

Monday’s analysis of the NSA files comes amid heated debate over government surveillance and its risks to civil liberties. UK Prime Minister David Cameron has repeatedly called for stronger surveillance power for British intelligence, proposing legislation in the wake of the attacks on Charlie Hebdo that would allow British police to break into encrypted communications of “suspected terrorists.”

In response to those heightened demands and continuing Snowden revelations, more than 100 editors signed a letter Monday coordinated by the Society of Editors and Press Gazette urging Cameron to put an end to police spying on journalists.

“The code needs to balance the seriousness of the alleged crime against the public interest in protecting the confidentiality of all journalistic sources and potential whistleblowers,” the letter states.

Records obtained under RIPA without warrants must be kept as one of the agency’s top secrets, the NSA files show.

A New York woman whose identity was stolen from her cellphone by DEA agents and used to set up a fake Facebook page to catch drug dealers has reached a $134,000 settlement with the federal government 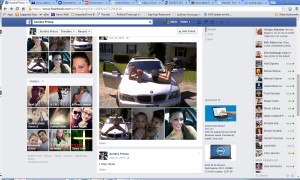