Posted on March 30, 2015 by Omahkohkiaaiipooyii

Obama forgets about free speech when it comes to mandatory voting

The next time President Obama wants to suggest that mandatory voting might be a good idea for America, he should try checking in first with the Bill of Rights. And then decide that the Constitution’s guarantee of freedom of political speech far outweighs our collective desire to see more citizen participation in democracy

For some people, not voting is a purposeful and informed decision that they feel sends a message about their disgust with the candidates who are running or the political process itself. It’s not a decision I particularly agree with — there’s not much evidence that terribly low voter turnout has improved politics or the quality of the people who run for office — but it’s theirs to make.

The president cites Australia as an example of a country with mandatory voting, but Australia does not have the explicit guarantee of free speech that is embedded in the U.S. Constitution.

By Ilya Somin March 19
Speaking to the City Club of Cleveland, President Obama suggested that mandatory voting in the United States might be a good idea. (WhiteHouse.gov)

In a recent speech, President Obama endorsed the idea of making voting mandatory. It isn’t clear whether he intends to actively push the idea. But he does suggest that it would be an improvement over the status quo:

President Obama on Wednesday suggested that if U.S. voters want to counter the outsized influence of money in politics, it might be a good idea to adopt mandatory voting.

“Other countries have mandatory voting,” Mr. Obama said at a town hall-style event in Cleveland, Ohio, citing places like Australia. “It would be transformative if everybody voted — that would counteract money more than anything.”

The president continued, “The people who tend not to vote are young, they’re lower income, they’re skewed more heavily toward immigrant groups and minorities… There’s a reason why some folks try to keep them away from the polls.”

For reasons I summarized in 2012, in response to a defense of compulsory voting by former Obama adviser Peter Orszag, making voting mandatory is likely to do more harm than good.

As noted in my 2012 post, mandatory voting would exacerbate the already severe problem of voter ignorance. While the differences are not enormous, people who currently don’t vote are on average less interested in political issues and more ignorant than those who do. Political theorist Jason Brennan presents more evidence along these lines in his part of the excellent recent book Compulsory Voting: For and Against.

In his speech, President Obama claimed that mandatory voting would diminish the significance of money in politics. The opposite effect is more likely. Most campaign spending represents expenditures on televised ads. For fairly obvious reasons, relatively ignorant voters are more likely to be influenced by simplistic 30 second ads than relatively well-informed ones (who, among other things, tend to have stronger preexisting views). Thus, a more ignorant electorate is likely to be one where campaign spending on television ads exercises more influence. I don’t think the influence of money on politics is either as great or as harmful as President Obama and many other liberals do. But if you disagree with me on that, you may have even more reason to oppose mandatory voting than I do.

Like other defenders of compulsory voting, the president touts the example of Australia, which is indeed a generally well-governed nation that has a compulsory voting law. But the full list of nations with compulsory voting is not one that inspires confidence. It includes such paragons of civic virtue as Argentina, Egypt, Congo, and Lebanon. By contrast, one of the few democracies with lower turnout rates than the United States is Switzerland, which is often considered one of the best-governed nations in the world. I don’t claim that Argentina and Egypt have bad governments and Switzerland a good one because of their respective voting laws. My point is merely that there is no clear correlation between turnout and good governance.

The only qualification for president that really matters

C’mon now, what do you think it is? 35 years old? Yup. Natural born citizen (whatever that is)? Check. Born in the U.S.? Nope, not required. There is, however, one thing you must be to become President of the United States: Wealthy.

For the last century, non-millionaire presidents have been exceedingly rare; we haven’t had one since Harry Truman. And politics have changed so much since his time that it’s inconceivable a non-wealthy person can rise to the White House in the present age. You must be a millionaire — preferably a multi-millionaire — to have any hope of ever becoming president.

Of 26 potential 2016 candidates rated by Crowdpac, only 4 have net worths below $1 million, and of these only 1 — Vice President Joe Biden — is a contender, and only if Hillary Clinton doesn’t run. But even his poverty is relative; Biden, who ranks among the poorest of the presidential aspirants, is 14 times richer than the average American.

It isn’t just the presidency; it’s politics at all levels. Ordinary working-class Americans can’t even conceive of running for public office. It costs too much. (In any case, they’re too busy working, just trying to make ends meet.) And political culture is alien to them. Anyone who has spent any time near politics knows how clubby it is. A connected, well-heeled, corporate crowd dominates this universe. 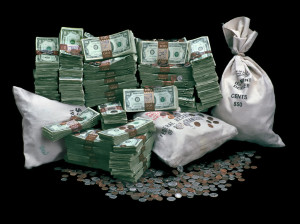 If you’re there at all it’s to do the unpaid, unsung, and unrewarding grunt work of politics — phone banking, etc. — or to clear the dishes off the tables after the poobahs eat the rubber chicken. It’s not utterly hopeless, though. As we saw in 2012, a lowly waiter with a cheap cellphone camera can determine which rich guy gets to be president. So, America is still a leveling country after all. (Source)

Photo: What it takes to be a politician