Posted on March 27, 2015 by Omahkohkiaaiipooyii

Israeli Prime Minister Benjamin Netanyahu yesterday vehemently denied aWall Street Journal report, leaked by the Obama White House, that Israel spied on U.S. negotiations with Iran and then fed the intelligence to Congressional Republicans. His office’s denial was categorical and absolute, extending beyond this specific story to U.S.-targeted spying generally, claiming: “The state of Israel does not conduct espionage against the United States or Israel’s other allies.”

Israel’s claim is not only incredible on its face. It is also squarely contradicted by top-secret NSA documents, which state that Israel targets the U.S. government for invasive electronic surveillance, and does so more aggressively and threateningly than almost any other country in the world. Indeed, so concerted and aggressive are Israeli efforts against the U.S. that some key U.S. government documents — including the top secret 2013 intelligence budget — list Israel among the U.S.’s most threatening cyber-adversaries and as a “hostile” foreign intelligence service.

One top-secret 2008 document features an interview with the NSA’s Global Capabilities Manager for Countering Foreign Intelligence, entitled “Which Foreign Intelligence Service Is the Biggest Threat to the US?” He repeatedly names Israel as one of the key threats.

While noting that Russia and China do the most effective spying on U.S., he says that “Israel also targets us.” He explains that “A NIE [National Intelligence Estimate] ranked [Israel] as the third most aggressive intelligence service against the US.” While praising the surveillance relationship with Israel as highly valuable, he added: “One of NSA’s biggest threats is actually from friendly intelligence services, like Israel.” Specifically, the Israelis “target us to learn our positions on Middle East problems.”

Other NSA documents voice the grievance that Israel gets far more out of the intelligence-sharing relationship than the U.S. does. One top-secret 2007 document, entitled “History of the US – Israel SIGINT Relationship, post 1992,” describes the cooperation that takes place as highly productive and valuable, and, indeed, top-secret documents previously reported by The Intercept and the Guardian leave no doubt about the very active intelligence-sharing relationship that takes place between the two countries. Yet that same document complains that the relationship even after 9/11 was almost entirely one-sided in favor of serving Israeli rather than U.S. interests:

The U.S. perception of Israel as a threat as much as an ally is also evidenced by the so-called “black budget” of 2013, previously referencedby The Washington Post, which lists Israel in multiple places as a key intelligence “target” and even a “hostile foreign intelligence service” among several other countries typically thought of as the U.S.’s most entrenched adversaries:

The same budget document reveals that the CIA regards Israel — along with Russia, China, Iran, Pakistan and Cuba — as a “priority threat country,” one against which it “conduct[s] offensive [counter-intelligence] operations in collaboration with DoD”:

One particular source of concern for U.S. intelligence are the means used by Israel to “influence anti-regime elements in Iran,” including its use of “propaganda and other active measures”:

What is most striking about all of this is the massive gap between (a) how American national security officials talk privately about the Israelis and (b) how they have talked for decades about the Israelis for public consumption — at least until the recent change in public rhetoric from Obama officials about Israel, which merely brings publicly expressed American views more in line with how U.S. government officials have long privately regarded their “ally.” The NSA refused to comment for this article.

Previously reported stories on Israeli spying, by themselves, leave no doubt how false Netanyahu’s statement is. A Der Spiegel article from last fall revealed that “Israeli intelligence eavesdropped on US Secretary of State John Kerry during Middle East peace negotiations.” A Le Mondearticle described how NSA documents strongly suggest that a massive computer hack of the French presidential palace in 2012 was likely carried about by the Israelis. A 2014 article from Newsweek’s Jeff Stein revealed that when it comes to surveillance, “the Jewish state’s primary target” is “America’s industrial and technical secrets” and that “Israel’s espionage activities in America are unrivaled and unseemly.”

All of these stories, along with these new documents, leave no doubt that, at least as the NSA and other parts of the U.S. National Security State see it, Netanyahu’s denials are entirely false: The Israelis engage in active and aggressive espionage against the U.S., even as the U.S. feeds the Israelis billions of dollars every year in U.S. taxpayer funds and protects every Israeli action at the U.N. Because of the U.S. perception of Israel as a “threat” and even a “hostile” foreign intelligence service — facts they discuss only privately, never publicly — the U.S. targets Israel for all sorts of espionage as well.

From The AVE Blog:

Is Israel’s PM a Racist? 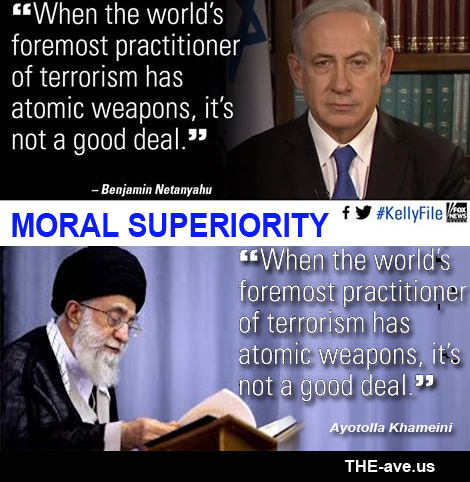 Playing the race card against Netanyahu

(POWERLINE) The West seems to be in the process of switching sides when it comes to Israel and Iran. Negotiations that will lift sanctions on Iran are in the final stages; meanwhile European leaders are discussing the imposition of sanctions on Israel. Moreover, under President Obama, the U.S. is no longer committed to ending Iran’s nuclear weapons program which represents an existential threat to Israel. Instead, it is prepared to sign »
Meanwhile a lot of the rhetoric is calling Iran racist because it sponsors terror.  Iran is said to be the world’s number 1 state sponsor of terror. The charge is bogus.
The major terror groups under the flag of Islam are Sunni.  With the fall of Syria, the support .. both money and fatwas .. comes largely form Saudi Arabia and the Guff States.
Iran is not responsible for ISIS or Boker Haram.  Iran is not responsible for the terror in Somalia or the CAR.  Iran sponsors guerilla forces, much as Vietnam did when we invaded their country .. except that Iran’s turf is bigger ..extending from its borders to Syria and Yemen.  Iranians or their proxies have not blown up planes or murdered Jews in Europe. That stud should be laid at the foot of our oil rich, Sunni allies.
While it is true that Hezbollah is an Iranian proxy, Hezbollah/ Iran, has as much right to fight its war with rockets as we do to use drones against the Taliban.  Even Hamas has that right and it is not a client state of Iran.
The real danger to Israel is not that Iran is going to send suicide bombers to bar mitvahs in Tel Aviv.  Nor is there any reason to expect Iran to lob a nuke on Jerusalem. The real danger is that a more respected  Iran, freed from sanctions. will use Netanyahu’s explicit support of apartheid as justification for a UN sanctioned embargo against Israel.
Imagine, Iran building submarines (or buying them form Germany or France).  Imagine those subs enforcing an arms embargo, a UN sanctions and embargo,  against Israel?
This entry was posted in Distraction and Destruction, International Law and Nuremberg Precedents, IMPERIAL HUBRIS AND HYPOCRISY, FALSE FLAG OPS, MSM MANIPULATION, NATIONAL SECURITY STATE, nuremberg precedents, IMPERIAL SOCIAL SYSTEMS ENGINEERING, EPISTEMOLOGY AND SCIENTIFIC METHOD, corrupt elites, ideological classrooms, Cyberwarfare and Nuremberg Precedents, Full SPECTRA Dominance, Imperial Impotence, "Tip of the Spear", The Intercept, non-Official Government Leaking for PR, Nobel Prize for Chutzpah, Cultures of Narcissism. Bookmark the permalink.