In Memory of Carter Camp (Ponca): Defender and Uncorruptable

Posted on August 15, 2014 by Omahkohkiaaiipooyii

In Memory of Carter Camp, Ponca

Carter Camp has passed over to the Spirit World. In memory, a note of thanks for Carter and all of those present for sharing this special day in 2004. Prayers for a good journey, Brenda, Censored News

CHAMBERLAIN, South Dakota — When the Lewis and Clark Discovery Expedition in South Dakota, Lakotas, Poncas and Kiowas were waiting for them and demanded that they turn around.

Camp said Lewis and Clark are a part of the American lie.

“They had no honor. They came with the American lie. They murdered 60 million people.”

Deb White Plume, Lakota from Pine Ridge gave the expedition a symbolic blanket of small pox. Another Lakota woman from Pine Ridge said she carries the DNA of the Lakota women who survived the slaughters that Lewis and Clark opened the door to. She said she is prepared to die for this cause.”I believe in armed struggle,” Wicopy Wakia Wi of Pine Ridge said. “The act of genocide stops here. We are tired of living poor. We are not afraid to die. I am willing to die.”She told them they would not proceed up the river.”You are not going on. I will organize every sister from here to Oregon to stop you.”

After that day in 2004, Mandrell did stop. He left the Lewis and Clark Expedition and formed his own journey, his own adventure that included American Indian friends that he made along the way.

Seated on the radio bus, Mandrell remembered meeting with Carter Camp’s son Vic Camp from Pine Ridge, on that day in 2004. “I still have his number on my speed dial.”

Earlier, Vic Camp had remembered the victory of hearing Mandrell had left the Expedition. During an interview in April, 2005, Vic Camp said, “That was a great victory for us.”

But on the banks of the Missouri River in South Dakota on that day in 2004, Lakota elder Floyd Hand, among four bands of Lakota spoke from the well that was chilling.

“We are the descendants of Red Cloud and Crazy Horse.””I did not come here in peace.”Hand said they would not smoke the pipe and if the expedition continues up the Missouri River, the families of the expedition members would suffer the spiritual consequences of small pox.

“We want you to turn around and go home,” Alex White Plume, Lakota from Pine Ridge, told the expedition.White Plume said Lakota are here on this land for a reason.”We were put here by the spirits.” He said the Lakota never lost their language or ceremonies and now they are making these requests: Lakota want their territory back, their treaties to be honored and to be able to continue their healing ways.

White Plume said many Indian people have become assimilated and colonized. “We pray for our own colonized people. We say they are in a prison in the white man’s world.” White Plume said there was no point in the expedition coming here. “All you did was open up these old wounds.”

Diane Sawyer asked the question I often am asked when people learn how hard it is to live on the rez. “why don’t you leave?” The question has many answers to us. Mainly we are still a tribal people and we want to live among our nations people.

We’re a people who consider our cousins as our brothers and sisters, our uncles and aunts as fathers and mothers. We have grandmothers and fathers galore and we care about all of them. We like to be there when someone dies or a baby is born. And we love our homelands.

We believe the soil and every plant contains the dust of our ancestors. I think the Irish who stayed in Ireland during the great famine would understand, or a Jew who stayed in Palistine before there was an Israel. But Americans who will move away from their family for a better climate or job will have a hard time understanding the strength of the attraction to a specific land.

The other reason we don’t become ‘economic refugees’ is that reservation poverty is preferable to living… in an American slum so we always go home. Most of us have actually left at some time in our lives, I was personally successful in California, but I came home.  Carter Camp
Carter Camp: Remembering Wounded Knee
published with Carter’s permission at Censored News in 2007

Ah-ho My Relations, each year with the changing of the season I post this remembrance of Wounded Knee 73. I wrote it a few years ago when some of our brave people had walked to Yellowstone to stop the slaughter of our Buffalo relations. When I did I was surprised at the response from people who were too young to remember WK73 and I was pleased that some old WK vets wrote to me afterwards. So each year on this date I post the short story again and invite you-all to send it around or use as you will. As you do I ask you to remember that our reasons for going to Wounded Knee still exist and that means the need for struggle and resistance also still exist. Our land and sacred sites are threatened as never before even our sacred Mother herself is faced with unnatural warming caused by extreme greed.

In some areas of conflict between our people and those we signed treaties with, it is best to negotiate or “work within the system” but, because our struggle is one of survival, there are also times when a warrior must stand fast even at the risk of one’s life. I believed that in 1973 when I was thirty and I believe it today in my sixties. But Wounded Knee 73 was really not about the fight to me, it was about the strong statement that our traditional way of living in this world is not about to disappear and our people are not a “vanishing race” as wasicu education would have you believe. As time has passed and I see so many of our young people taking part in a traditional way of living and believing I know our fight was worth it and those we lost for our movement died worthy deaths.

Photo by Cat Carnes, thank you 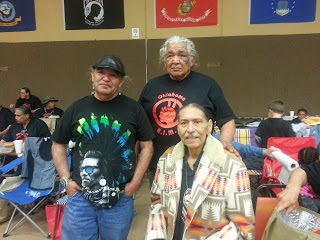 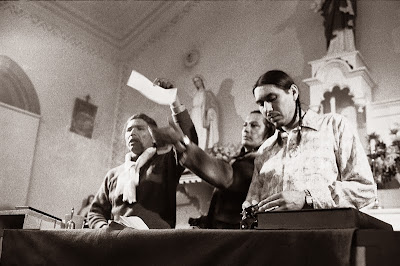 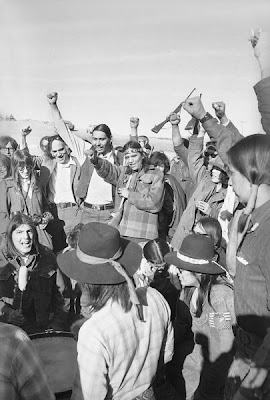 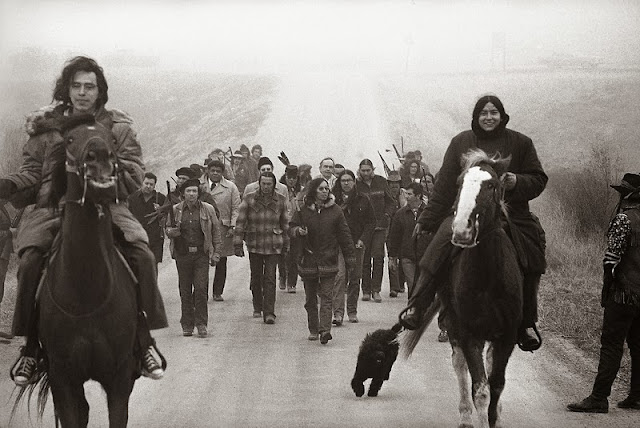 “The greatest of us has gone on ahead now…” began the open letter to our family from our Wazhazhe brother, Carter Revard, Poet Laureate for the Osage Nation.

The son of Woodrow Howard Camp and Jewell Faye McDonald Camp, a descendant of the McDonald and Yellowberry families, Carter was born the summer of 1941 at Pawnee Indian Hospital, the third of six children. He graduated from Haskell Institute, now Haskell University, in 1959. Excellent in sports, Carter’s basketball team lost in the Kansas State Finals, an experience never forgotten. Shortly after leaving Haskell, he enlisted in the U.S. Army serving a tour in Western Europe. After his discharge he relocated with the family to work in Los Angeles, Calif., and played basketball for the American Indian Athletic Association on weekends.

Following his father’s philosophy of staunch unionism, at his place of employment Carter began representing fellow workers as the shop steward and was then elected business agent for the International Brotherhood of Electrical Workers. Coming of age in the turbulent 1960s when racism was rampant and the U.S. President and other great leaders were murdered, Carter thus began his lifelong passion as a champion for social change and specifically for his beloved Native people.

In 1970, back home in Oklahoma, Carter worked for change in the way federal funds were distributed in the Oklahoma school system meeting with school and tribal officials. Shortly thereafter the Johnson-O’Malley monies that were earmarked for native children began to be used the way they were intended, an auspicious beginning and brought notice to friend and foe alike. Carter joined the still fledgling American Indian Movement [AIM] during this period and soon after organized the first AIM chapters in Oklahoma and Kansas.

The Trail of Broken Treaties was a nationwide protest in the form of a caravan of native activists traveling from the west coast to Washington D.C. with many stops in between. The huge Oklahoma/Kansas contingent, over 20 carloads, was a reflection both of Carter’s organizing skills and the readiness of the native people to help bring about positive change beginning with a review of native treaty’s with the U.S. government.

During the eventful caravan trip, Carter and Hank Adams, president of The National Council of Churches, co-authored the groundbreaking “Twenty Points” summation document to present to government officials in Washington. The Nixon officials chose not to meet with AIM leaders resulting in a three day takeover of the Bureau of Indian Affairs building ending only with government concessions made including future treaty negotiations.

At this time, Native rights violations, civil and legal were commonplace throughout the United States with South Dakota leading the way in police brutality and inhumane treatment. With the massacre of hundreds of innocent women and children at Wounded Knee, S.D. in 1890, it was a historically appropriate site for the American Indian Movement to bring national attention to the struggles of the Lakota and all Native peoples.

There was a great meeting of all the Lakota chiefs with the exception of one who sent a relative. There it was decided to invite the AIM as a last desperate call for help. The ensuing 71 day occupation of WK served as a rallying call and was heeded throughout the nation with carloads of Native people being arrested as far as 500 miles distant. Carter Camp was given the honor of leading the first wave of warriors into Wounded Knee, securing communications and making safe the entry of the caravan of activists.

“Finally I bent over and picked a sprig of sage…I looked for BigFoot and YellowBird in the darkness and I said aloud, ‘We are back my relations, We are home, Hoka Hey’” – Carter Camp.

Native scholars and activists call this WK a benchmark in the struggle for Native sovereignty. After Wounded Knee in White Oak, Okla. the last great national gathering of AIM took place. Carter was elected the national chairman by acclamation. From that time until the present he has continued the fight to protect the remnants of sovereignty that we still enjoy, with protecting the Mother Earth foremost.

Carter was preceded in death by his parents and sister Darlena Overland. He is survived by his wife, Linda Carson Camp and sons Kenny, Jeremy, Victorio, Mazhonaposhe and Augustus. Also sister, Casey Camp-Horinek and brothers, Craig and Dwain Camp. Carter also leaves behind numerous nieces and nephews, a large extended family and innumerable friends from across the nation. Casket bearers will be, Kenny Camp, Jeremy Reed, Victorio Camp, Mazhonaposhe, Ahmbaska Camp, Augustus Camp, and Frank Carson.

The traditional noon feast will be served at Ponca Nation Cultural Center, Tuesday, Dec. 31, to be followed by service at 2 p.m. and burial at the Ponca Nation Cemetery up on the hill under the direction of Trout Funeral Home and Crematorium.

Please share this link (located in your browser)
http://bsnorrell.blogspot.com/2013/12/in-memory-carter-camp-ponca.html

Posted by brendanorrell@gmail.com at 4:10 PM

This entry was posted in International Law and Nuremberg Precedents, REAL HISTORY UNCOVERED, WHISTLE-BLOWERS, INDIGENOUS SCIENCE AND SCIENTIFIC METHOD, INDIGENOUS JUSTICE, US AND HUMAN RIGHTS, THE DEFENDERS, ECONOMIC DEVELOPMENT AND SUSTAINABILITY, VETERANS AND RESISTANCE, STTPML So That the Peoples May Live, nuremberg precedents, Indigenous Peoples and Genocida, Revisionist History. Bookmark the permalink.