Posted on March 7, 2015 by Omahkohkiaaiipooyii

Will Ferguson’s police chief be next? 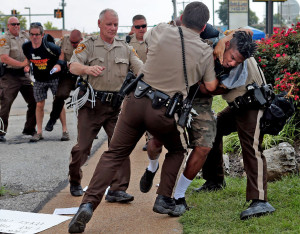 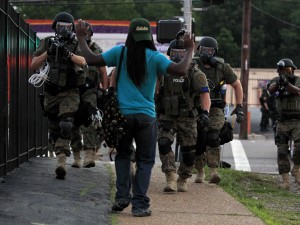 Timeline for one of America’s worst police departments: 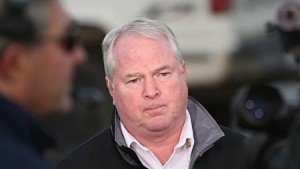 August 13, 2014: Police brutalize and arrest journalists covering Ferguson protests. According to Wikipedia, “Tom Jackson, the Ferguson police chief denied any suppression of the media. U.S. President Barack Obama addressed the First Amendment violations, saying … ‘police should not be bullying or arresting journalists who are just trying to do their jobs and report to the American people on what they see on the ground.’” 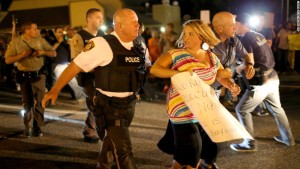 March 6, 2015: Two of Ferguson’s senior police commanders resign for sending racist e-mails. The city’s court clerk was fired earlier in the week for the same reason. The mayor refuses to speculate about Jackson’s future and says, “He’s still the chief.” I don’t see how he can remain in that position after what’s happened on his watch. 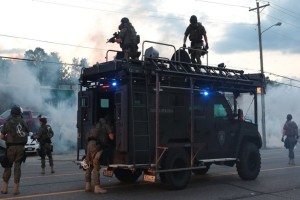 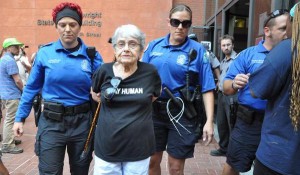 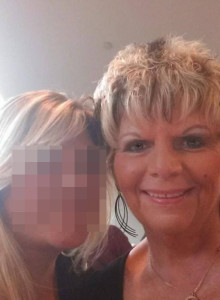 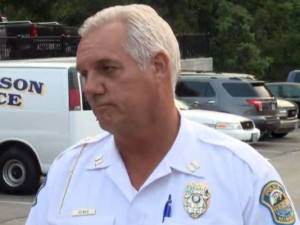 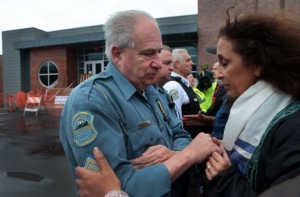 “What black man holds a steady job for four years?”

That was a Ferguson cop joking about the President of the United States in an email to a municipal court employee explaining why Obama wouldn’t be president very long, according to a Justice Department report released Wednesday, the Guardian reported.

At this point the email’s author isn’t identified, but following release of the report, Ferguson’s mayor held a press conference — which the police chief inexplicably didn’t attend — and announced that a police department employee has been fired and two others placed on administrative leave pending investigation of that and several other racist emails.

The DOJ’s scathing report found “egregious evidence of mistreatment of African American citizens by the police,” and outlined a pattern of systematic racism in the white-run city, whose population is predominantly black and poor. Ferguson’s all-white police force and municipal court system exploit and discriminate against blacks, who account for most of the city’s tickets, fines, and arrests.

U.S. Attorney General Eric Holder described Ferguson as “a community where local authorities consistently approached law enforcement not as a means for protecting public safety, but as a way to generate revenue” and “numerous constitutional violations by their law enforcement officials including First Amendment abuses, unreasonable searches and seizures, and excessive and dangerous use of force; exacerbated by severely disproportionate use of these tactics against African Americans,” according to CBS News.

I think the situation calls for a radical housecleaning. DOJ should sue in federal court to have city administration placed in court-supervised receivership, dissolve the police department and municipal courts and have those functions contracted to the county (similar to what several King County, Washington, suburbs do), overhaul the city’s finances and revenue generating system, and enforce the Voting Rights Act to protect the rights of Ferguson’s black citizens to register and vote. 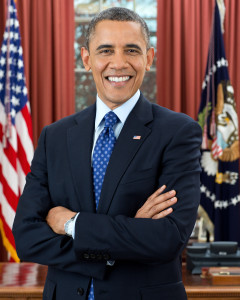 Photo: This man can’t hold a steady job, according to a former Ferguson city employee, who is now unemployed.

(based on material from the Hindu) Last Tuesday, back over Washington’s Eastern border, the Idaho Senate was opened by a Hindu prayer in Sanskrit and English.  Society of Hinduism president Rajan Zed gave the prayer after being invited by Senate President Pro-Tem Brent Hill.

Four Republican Senators walked out.  Senator Steve Vick walked out of the Senate saying that that Hindu prayers should not be allowed because the U.S. was “built on the Judeo-Christian, not only religion, but work ethic, and I don’t want to see that undermined.” Hindus “have a caste system,” he added. “They worship cows.” Senator Sheryl Nuxoll said she boycotted Mr. Zed’s prayer because she believed the United States is a Christian nation and “Hindu is a false faith with false gods,” according to the newspaper.

The Statesman quoted Mr. Zed as saying of the protests: “We don’t mind. Hinduism is more embracing.”

A former candidate for the Republican Party’s presidential nomination, he had earlier called Hinduism “demonic.” 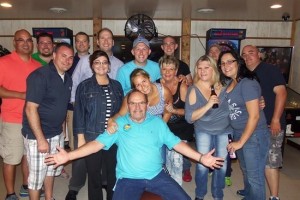 If you’re interested, this article delves into who the bad guys are in America’s most infamous municipality. There’s so much more to this story than the issue of Darren Wilson’s guilt or innocence. DOJ’s verdict: Wilson is innocent, but Ferguson is a pit of racism and corruption. “While it’s great that Mary Ann Twitty has been fired, at least three more Ferguson executives cited in the DOJ report still remain on the job.”

Photo: “In the picture above, you are looking at former Ferguson Police Officer Darren Wilson, two months before he killed Mike Brown [blue shirt and cap, top center], with his hands around Mary Ann Twitty, the top court clerk in Ferguson [black dress, crouching], who was cited in the DOJ report over and over and over again for racism and corruption. She was the first person fired by Ferguson Mayor James Knowles. While she dismissed tickets and citations for white judges and friends, she pushed and pushed for every penny of every fine to be paid by African Americans every chance she got. She sent flagrantly racist emails openly to her colleagues as if they all must have shared her beliefs.”

The triumvirate is gone. The three people most responsible for turning the City of Ferguson into a racketeering syndicate — municipal judge Ron Brockmeyer, city manager John Shaw, and police chief Tom Jackson — have been ousted. So has Mary Ann Twitty, the city’s racist court clerk. There is more work to do. No doubt many of Ferguson’s cops need to find other employment. The city’s black population needs to be registered to vote. 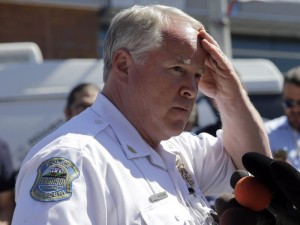 The white mayor and city council of this predominantly black city, however well-intentioned they may be, are not representative of the community and should be replaced by elected officials who are — democracy demands no less than a new city government that represents the governed. And taking measure of the egregious harms done to countless victimized citizens, there really should be prosecutions and people going to prison.

Ferguson city manager John Shaw, 39, was fired by the Ferguson city council tonight. A news release said Shaw’s departure is “effective immediately,” the Seattle Times reported. Shaw issued a statement claiming he “never instructed the police department to target African Americans, nor falsify charges to administer fines, nor heap abuses on the backs of the poor. Any inferences of that kind from the report are simply false.” But he was the city official with authority to hire personnel and establish city, municipal court, and police department policies. And that could mean his departure is a prelude to the police chief’s replacement. In fact, I’d guess that’s certain. 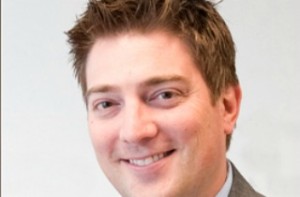 Shaw was homegrown talent; he grew up in the area, graduated from a local college, and lived in Ferguson before working for the city. Apparently he just wasn’t all that talented. During his eight years in the job, Ferguson became one of the most corrupt and racist cities in Ameria.

Photo: Ex-Ferguson city manager John Shaw. Too young and dumb for the job?