Posted on March 16, 2015 by Omahkohkiaaiipooyii

But today a very real threat exists over all American cities, and the national security advisor does not notice. The threat issues from Washington and arises from the demonization of Russia and its leadership.

Wolf Blitzer (CNN, March 13) used the cover of a news program to broadcast a propaganda performance straight out of the Third Reich or perhaps from George Orwell’s 1984. The orchestration presented Russia as a massive, aggressive military threat.

The screen was filled with missiles firing and an assortment of American General Strangeloves urging provocative measures to be deployed against the Russian Threat. Blitzer’s program is part of the orchestrated propaganda campaign whose purpose is to prepare Americans for conflict with Russia.

It was such irresponsible propaganda and so many blatant lies for a media organization to sponsor that it was obvious that CNN and Wolf Blitzer had no fear of being called on the carpet for spreading war fever. The so-called “mainstream media” has been transformed into a Ministry of Propaganda.

Similar propaganda is being spread in the UK where defense minister Michael Fallon declared Russia to be a “real and present danger” to Europe. US troops and tanks are being rushed to the Baltics on the pretext that Russia is going to attack.

The propaganda is driving the world toward war. The propaganda has destroyed the trust between nuclear powers and has resurrected the threat of nuclear armageddon. The Russian government sees that Washington and its NATO vassals are conjuring a nonexistent Russian Threat. Clearly this conjured threat has a purpose that intends Russia harm.

Washington’s propaganda spread by the presstitutes is the most irresponsible act in human history. Reagan and Gorbachev succeeded in removing the threat of nuclear war, and the crazed neoconservatives and their media whores have brought it back.

Washington’s propaganda attack on Russia and Vladimir Putin is like Washington’s attack on Afghanistan and Osama bin Laden, Iraq and Saddam Hussein, Libya and Gaddafi. Does this mean that Washington intends to attack Russia in a pre-emptive nuclear strike? If so, it means the end of the world. Clearly, the threat to the United States and the entire world resides in Washington and not in Moscow. The threat is the crazed neoconservative ideology of US world hegemony supported by the unbridled greed of American corporations to control the resources of the world

Putin understands the seriousness of the situation and is working hard to diffuse it, but Washington has made it impossible to diffuse. Washington’s price is that Putin must hand over Crimea and the Russian Black Sea naval base, abandon the Russian populations in southern and eastern Ukraine, and accept NATO military bases in Ukraine. Washington’s demand is a demand for Russia’s pre-emptive surrender.

In the CNN propaganda show, Wolf Blitzer failed to report that German intelligence challenges Washington’s claims about Russia and that the French and German governments have finally realized that Washington is insane and are working desperately to stop Washington’s drive toward war.

Washington and its UK puppet have spent the entirety of the 21st century creating death and destruction. Seven countries have been invaded, bombed, or droned in order “to spread democracy.” Iraq is destroyed, as is Afghanistan, Libya and Somalia .

Syria nearly so, and Pakistan and Yemen are politically and socially destabilized by incessant US air attacks. The democratic, elected, governments of Honduras and Ukraine have been overthrown by US coups. Venezuela is next in line, with Bolivia, Ecuador, Argentina and Brazil waiting their turn.

Washington has given the world 14 years of brutal and inhumane war. Isn’t this enough evil? Does Washington have to give us more?

Dr. Paul Craig Roberts was Assistant Secretary of the Treasury for Economic Policy and associate editor of the Wall Street Journal. He was columnist for Business Week, Scripps Howard News Service, and Creators Syndicate. He has had many university appointments. His internet columns have attracted a worldwide following. Roberts’ latest books are The Failure of Laissez Faire Capitalism and Economic Dissolution of the West and How America Was Lost.

German, European Govts Challenge US on Its “Dangerous Propaganda” re UKRAINE 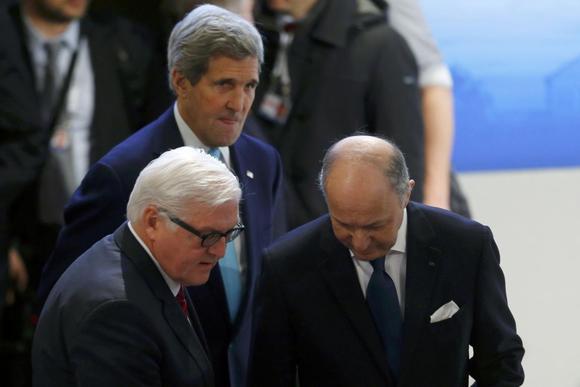 As noted in today’s special report by Chris Martenson: Having reached a tenuous peace agreement with Ukraine and Russia (without the US), Germany is realizing and announcing that, indeed, the US does not seem intent on peace.

McClatchy reports that German government officials have “recently referred to U.S. statements of Russian involvement in the Ukraine fighting as ‘dangerous propaganda’”.  In light of US propaganda and military support for Kiev, Germany even asked outright whether “the Americans want to sabotage the European mediation attempts in Ukraine led by Chancellor Merkel?”

While there is agreement in the West that Russia does support the Ukrainian democrats whose elected leader was violently overthrown with US and European support (the US supports numerous groups, including anti-Semitic neo-Nazis and Islamic extremists, around the world, in addition to illegal US invasions), Germany and other European governments say US officials such as US Gen. Breedlove and Obama’s asst. sec. state for Europe, the notorious Victoria Nuland, “have been exaggerating the extent of Russian involvement in the conflict.”

Breedlove, for instance, is issuing untrue statements – lies – for the purpose of “playing to” – propagandizing – “an American audience”, which European officials say “doesn’t advance peace efforts”, another polite way of saying it conspicuously impedes them.

Since being caught red-handed and forced to address the issue of their “exaggerated claims” about Russia’s involvement in doing something the US does continually, a US official responded anonymously and changed the US tune, trying now to shift focus away from the exact numbers, about which the US was previously so adamant.

Ukrainian officials have made similar claims, on scores of occasions announcing an all out Russian military “invasion” of Ukraine.

The exposures by the German government of US [and thereby Kiev’s] lies, notes Antiwar.com’s Jason Ditz, “may finally be the explanation … for how US[/Kiev] claims of huge Russian military presences never come with any pictures…” except ones that have been plastered on the front of the New York Times and then debunked as fraudulent and later retracted, deep inside the paper – see Robert Parry‘s “NYT Retracts Russian Photo Scoop”.

As part of what European officials say is sabotaging the peace process, the US is now providing another $75 million worth of aid to Kiev, including 230 Humvees.  This is in addition to the $120 million already given to Kiev’s forces by the US.