Posted on February 6, 2015 by Omahkohkiaaiipooyii

“The Arizona Attorney General’s Office is asking for dismissal of a lawsuit filed by a teacher who was brutally assaulted and raped after being left in an unguarded prison classroom with a convicted sex offender. The AG’s reasoning is essentially this: the woman knew she was in a prison, so what did she expect? …

“The woman, who works for DOC as a teacher, was scheduled to give a GED exam to seven sex offenders housed at the Arizona State Prison Complex-Eyman on Jan. 20, 2014. … Normally, such tests are given in the visitation room, which is monitored by security cameras and corrections officers. But on that day, because of a special event, she was sent to an unmonitored classroom, handed a radio and told to use it if there was any trouble, her lawsuit says. …

“The teacher told investigators she screamed for help, but no one came. After the attack, Harvey tried to use her radio to call for help but it was tuned to a channel the guards didn’t even use.”

Comment: A personal injury lawsuit normally is based on negligence, which involves a violation of a duty of care owed by a defendant to a plaintiff. There is a doctrine in tort law known as “assumption of risk.” Essentially, if you knowingly engage in a dangerous activity, it’s your own fault if you get hurt and therefore the defendant isn’t liable for your injuries.

The state’s argument in this case is that prisons are dangerous places, and the teacher assumed the risk of being raped by working there. This overlooks the fact that other prison staff put the teacher at exceptional risk by abrogating the precautions normally taken to protect her from the inmates. There’s also what lawyers call a “policy issue” here; that is, the court shouldn’t accept the state’s argument because requiring individuals to assume all the risks of working in prisons would discourage people from accepting such employment and make it impossible for the state’s prison system to hire teachers and other workers. 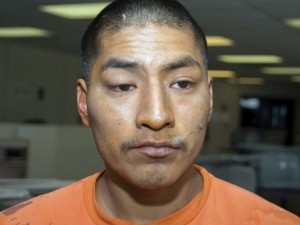 this lawsuit, the state attorney general’s office should try to negotiate a reasonable settlement with her.

Photo: Convicted rapist Jacob Harvey allegedly assaulted, stabbed, choked, and raped a female teacher after taking a GED test. I suspect these charges, if proven, may delay his graduation.